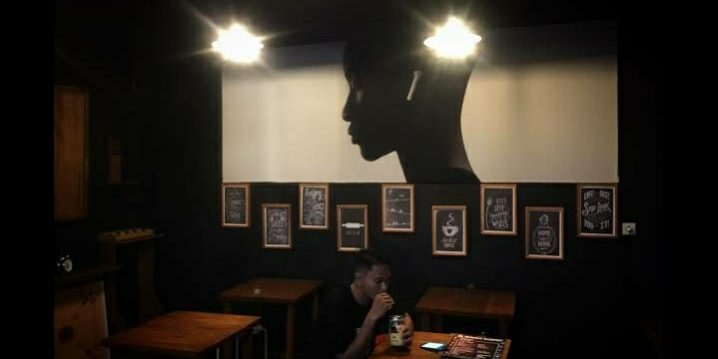 An alumnus, often called Andri, built a retro-nuanced café in a rural area, precisely in Desa Sukapura, Kecamatan Cidaun, Kabupaten Cianjur. In the area, there are no place to hang out for the youths, while access to the city center is quite far.

“In Bandung and other big cities, there are a lot of cafés whose interior is well designed and comfortable. It is hard to find one here. Seeing the opportunity, I thought to open up a café, facilitate various groups of people so that they do not have to go all the way to the city to just hang out,” he said on Saturday, 17 July 2021.

Andri named its café ‘Waroeng Baceprot’, Sundanese vocabularies meaning ‘talk much’. The choice of the name was apparently not without reason. As a Communication Studies graduate, he wants consumers who come to his shop to interact with each other and enliven the atmosphere.

“Baceprot itself is actually a pun on the language I use to chat with friends in Bandung. The direction is of course more to communicate, because it is impossible for consumers to visit without interacting. On the other hand, the name also tends to be easy to remember and attract attention,” he said.

Since being established in 2018, he relied on Facebook as a promotional medium. In a tit for a tat, the community was very enthusiastic and until now Waroeng Baceprot already has loyal customers.

“Different from the community in the cities who have already switched on to Instagram, 90% of people here are still using Facebook. So, I promote via Facebook with the highlight of cozy, aesthetic and innovative place layout,” he continued.

The café offers a variety of processed coffee as a mainstay menu. The prices are also affordable, starting from 10-25 thousand rupiah. However, the raw materials used are of high quality to maintain the taste.

Because it is located in the countryside, there are several menus that are less familiar to consumers. Menus that are considered mainstream in the city actually appeal to them. According to Andri, rather than the appearance and composition of the ingredients, consumers in the village are much more interested in menus with large portions.

For Andri, business is not only about gaining profit. More than that, he was grateful, he could also open up job opportunity for young people in the area as well as improve the village through innovations which is in line to millennials’ mindset.

“My principle, if a local people do not live or stay in the city, they will definitely return home where they grew up. This is my reference: about what I can give and be benefits to my hometown. Alhamdulillah, with God’s will, I can hire three employees and Insya Allah are going to open another booth or branch in other sub-districts,” he said.

He always emphasizes to his employees to put forward a professional attitude. He tries to form the character of workers who are disciplined, active, and initiative in order to create a high work ethic.

“I set th SOP and remind them to put personal interests above work matters. Control the mood so as not to affect service to consumers. That way, consumers will be attracted to come back again, not only because of the menu and the place, but also the friendliness of the employees,” explained Andri.

He also invites millennials who have similar passion not to be doubtful to start the business in an early stage. He proved it: that starting from his hobby, he can open a café and improve his hometown potential.

“Friends who have hobbies or passion, concept, strategy in a certain field, or even can detect the opportunity, do not be afraid to start. If you are just wondering, when will you even start? I am also on the move, constantly evolving and following trends. There is definitely a risk, the important thing is to just live it first and do not be half-hearted. Make your expectations come true,” he concluded. (Reta)*