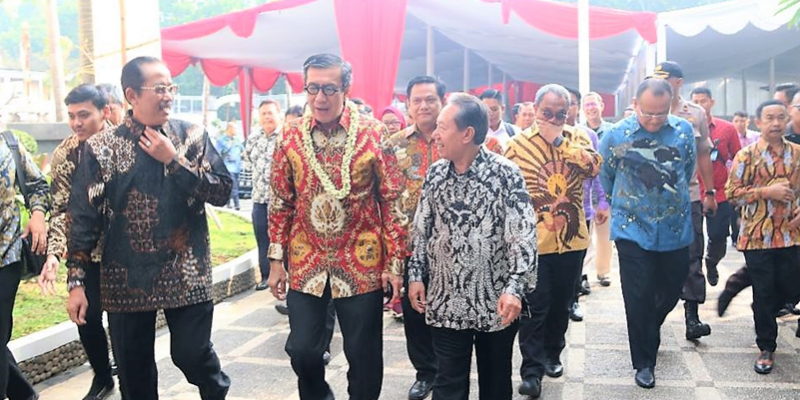 The atmosphere of UNPAS in Jl. Sumatera 41, Bandung, Wednesday, December 4th, 2019, is rather different than the usual. About 352 representatives from 47 countries gathered there to attend the 10th Global Alliance Justice Education (GAJE) Worldwide Conference held from in the Hall of Mandala Saba dr. Djoendjoenan, December 4th – 10th, 2019.

In his speech, the Minister Yasona Laoly stated that the concept of justice and equality in law became a fundamental thing to uphold human rights. He wished that the attendance of several participants from different countries, including those with various backgrounds, academics, Non-Government Organization (NGO) and legal observer and expert, could be able to give a wide perspective for Indonesia, which has always been trying to implement the law as a basis of all life aspects.

“The concept of legal justice becomes the most relevant issue standing together with the law enforcement in various countries, including Indonesia,” he said.

Yasona Laoly also hoped that the conference could bring inspirations, concrete actions, new ideas and initiative movement to build and uphold legal justice and human rights. This is also part of international issues.

“Indonesian government has been trying to enforce and uphold legal justice and human rights effectively and transparently. I hope this would work very well,”, he said.

In his speech, Rector of UNPAS Prof. Dr. Ir. H. Eddy Jusup Sp., M.Si., M.Kom stated that the most important thing in the conference is the presence of global awareness about caring for marginal group in the societies. Is not it stated in the constitution that every citizen has equal legal rights?

The Rector himself believed that all participants are truly caring about raising the social awareness, including in the field.

According to explanation of the Chief Executive, Irma Rahmawati, SH., MH., LLM., Ph. D, the participants registered in the conference amounted to 352 persons, from 47 different countries. The opening ceremony was successfully carried out by Minister of Law and Human Rights, Yasona Laoly.

GAJE is the association of legal experts which focuses more about education and legal help for societies, especially for lower-class. This association hold the international conference every two years and has 52 countries as members from 5 continents.

According to Rahmawati’s explanation, this year is the tenth. “This is the first time [the conference] held in Indonesia. And the Faculty of Law UNPAS becoming the host,” she said. Before Indonesia, GAJE has been held in several countries, including Mexico, Turkey, India and the Philippines.

UNPAS, as a host, did not plan and hold the conference instantly. It has already been prepared since a year before, including the registration process (from various countries) as well.

When applying as a host, Indonesia must compete to Poland. However, GAJE finally decided that the conference would be held in Indonesia. Meanwhile, other than UNPAS, University of Udayana Bali applied as well. GAJE finally chose UNPAS because it is registered as executive member. ***

Korean Foundation Ready to Implement Programs in Faculty of Economics and Business University of Pasundan
January 29, 2020