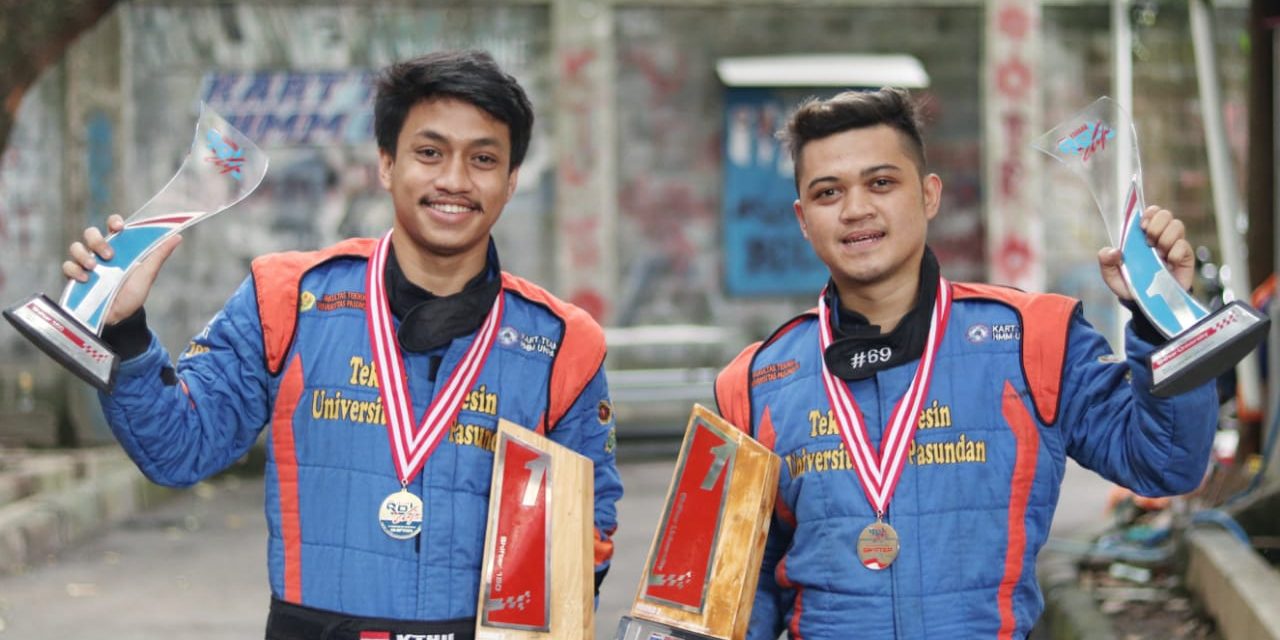 BANDUNG, unpas.ac.id – Go-cart team of Unpas Faculty of Engineering keeps showing its existence and outstanding achievement in various go-cart national championship. Every year, the team called Kart Team Himpunan Mahasiswa Mesin (HMM) has been consistent to obtain the first place and get the cup in the prestigious go-cart event.

Currently, two racers of Kart Team HMM succeeded to get the all-series champion of 2021 Eshark Rok Cup held in Sentul International Kartng Circuit, Bogor. On the Shifter 150, the position was taken by M. Iqbal Tawakal, while on the Shifter University was placed by Imam Muhammad Shavid.

Their well-performed achievement is indeed all inseparable from the careful strategy preparation and planning. For Iqbal and Imam, other than maintaining the physics program, skill and knowledge, other important things is to keep their consistency and avoid mistakes that could lead to the decrease in the number of points.

“Personally, we should be still optimistic when competing to other professional team. We try as good as possible to avoid fatal mistake which could lead to a point decrease. The point should still be stable. We try not to make it fatally useless at the end of the series,” Iqbal said, at Unpas Campus IV, Jalan Dr. Setiabudhi No. 193, Bandung, on Thursday (April 8th, 2021).

Individual and team evaluation (after each race competition) becomes the important thing to find out the mistakes during the race. Therefore, mistakes could be fixed and minimized in the next series.

In the go-cart championship, final result really depends on points earned. Point calculation was divided into two aspects, individual and team points. Racers are targeted to reach the very-front final to get the maximum point, while the whole team should also complete the race to earn more points.

“If the points earned are not consistent, it would lead us not to be a Grand Champion. Therefore, we make it as fair as possible,” he said.

Although Imam had suffered a chest injury in the previous season, he still showed his best performance and was able to grab the first position. This is because he spent his time trained, prepared and got an optimal team collaboration.

“We spent our time trained in Sentul in this pre-season. So that we have fully known and recognized the venue itself. We could also set out machine and experience more carefully. Therefore, suffering from injuries is not a problem at all. It could be handled perfectly,” Imam explained.

“I wish we could maintain this position. On the next series, we wish we could avoid the mistakes that lead to a point decrease,” Imam ended. (Reta Amaliyah S)*

Being Aware of Public Health, Unpas Faculty of Medicine Holds an Eye Check-up for Free
August 18, 2022