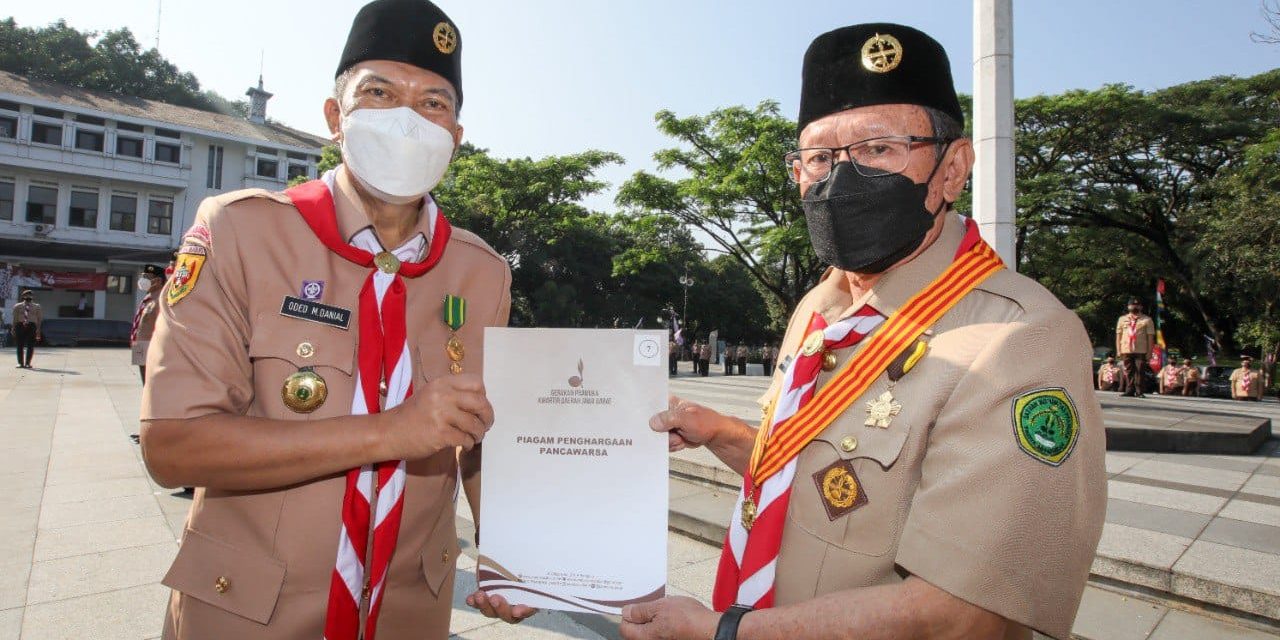 The award, Melati Emblem, was handed over to Prof. Turmudzi for his contribution as the scouts’ leader in Bandung. The emblem was handed by the Major of Bandung, Oded M. Danial on the Pramuka Day Ceremony (Upacara Hari Pramuka) at the City Hall Plaza, on Wednesday, 18 August 2021.

For Prof. Didi Turmudzi, the award is an honour and part of his long journey as one of Pramuka members. His work in scouting began when he served as the Headmaster of Junior High School, Senior High School, Rector, and Advisory Council.

“Do not expect anything for what we have done. Keep trying to do the best. Pramuka teaches us the character of staying together, caring, modesty, politeness, and cooperation. This will be very effective if we implement and go directly to the community,” he said.

He thought that Pramuka within educational environment/institutions established by Paguyuban Pasundan has been really active and sold. The scouts were spread in 120 schools and 4 universities, namely Universitas Pasundan, STIE Pasundan, STKIP Pasundan and STH Pasundan.

“All of the institutions have been actively running on the scout/ Pramuka. We even hold an event of integrated camp program every year to make a more solid relation between each other,” he continued.

In his speech, Oded hoped that Pramuka could be able to synergize with other government programs. In addition, Pramuka should be able to be the pioneer of people’s movement to contribute in developing the country, especially in fighting for Covid-19 pandemic

“Covid-19 pandemic has hit the country, including Bandung, for more than 1 year. In this moment of 60th anniversary, we hope that Pramuka could help the government stopping the spread of Covid-19 pandemic,” he explained.

Oded also said the Pramuka is one of the basic of education for Indonesian young generation. Therefore, they are demanded to take actual part and contribution in the life of the nation and state.

“Pramuka should interact with the people and Bandung City Government in an attempt to form the character to challenges and problems, as well as develop the community as written in Tri Satya Pramuka,” he concluded.