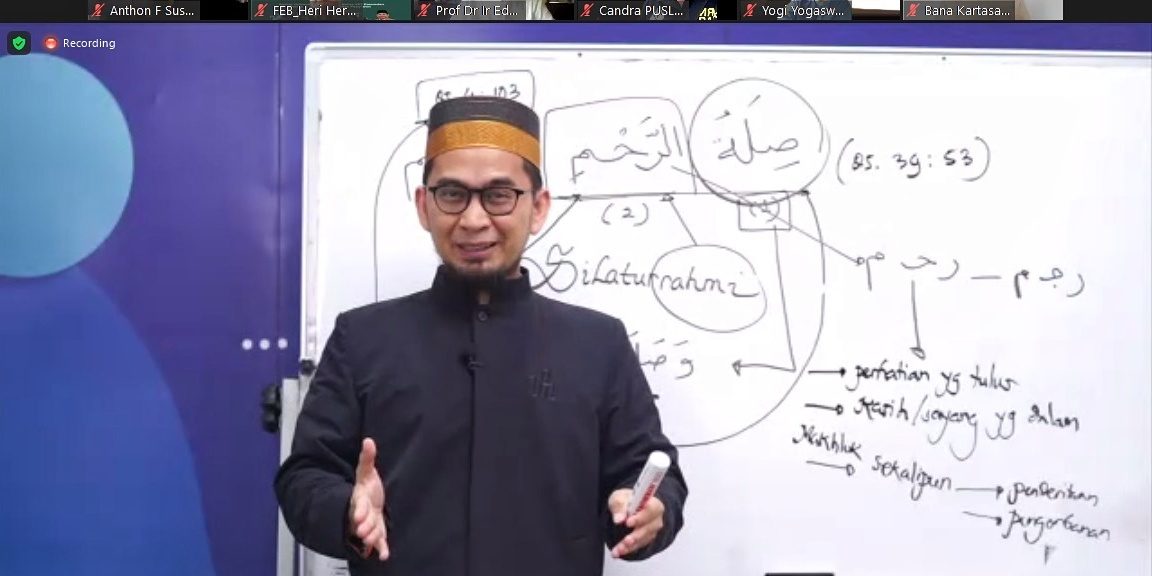 BANDUNG, unpas.ac.id – Although Idul Fitri has already ended and Covid-19 pandemic condition still restricts us to meet each other, silaturahmi between every academic civitas of Universitas Pasundan is still well-maintained.

Silaturahmi was held virtually and brought a suitable theme with Unpas identity, “Merawat Silaturahmi dalam Bingkai Nyantri, Nyunda, Nyakola” (the theme means that silaturahmi can still be organized in a form a Sundanese proverb which means people with religious, cultured and educated attitude). It was attended by approximately 490 participants and presented popular Ustaz, Adi Hidayat, LC., MA to give his lecture.

The Rector said that although silaturahmi is quite late in progress, the pray must still be sent every time. At this running age, Unpas keep doing our effort to provide the best service for students to be the excellence generation who have an attitude of being nyantri, nyunda, nyakola (religious, cultured and educated).

“Unpas students are expected to have more advantages compared to the others, and packed with spiritual, intellectual and emotional intelligence,” he said.

In his next speect, Head of Pasundan Higher Education Foundation Dr. H. Makbul Mansyur, M.Si advised that the meaning of friendship can be absorbed and lived for the common good.

“Hopefully the religious lecture sent by Ustadz Adi Hidayat could remind us to do self-introspection. We hope it [the lecture] would give us self-relaxation and improve our piety in this current condition and situation,” he said.

On that occasion, Ustadz Adi Hidayat described various things about the concept presented on the theme. He thought that it needed an evaluation and synergy to make the three concepts could be well-implemented.

“The theme is really nice, but we also need to evaluate. Are the concepts being discussed really intertwined? Do all three work, or just one? We must understand and understand how to reduce this conception,” he explained.

Ustadz Adi Hidayat also conveyed in detail about silaturahmi and the concept of nyanti, nyunda, nyakola being discussed in Al Quran, human nature and piety values. He ended the silaturahmi by sending moral messages to bring religious spirit. (Reta)*